Upon a time… there lived a very powerful Sultan whose kingdom stretched to the edges of desert. One of his subjects was called Ali, a man who enjoyed making fun of his ruler. He invented all sorts of tales about the Sultan and his Court, and folk would roar with laughter at his jokes. Indeed, Ali became so well known, that people pointed him out in the street and chuckled.

Ali’s fun at the Sultan’s expense reached the point where the Sultan himself heard about it. Angry and insulted, he ordered the guards to bring the joker before him.

‘I shall punish him for his cheek’, said the Sultan eagerly, as he rubbed his hands, thinking of the good whipping he was about to administer.

But when Ali was brought before him, he bowed so low that his forehead scraped the floor. Giving the Sultan no time to open his mouth, Ali said,
‘Sire! Please let me thank you for granting my dearest wish: to look upon you in person and tell you how greatly I admire your wisdom and handsome figure. I’ve written a poem about you. May I recite it to you?’

Overhelmed by this stream of words and delighted at Ali’s unexpected praise, the Sultan told him to recite his poem. In actual fact, Ali hadn’t written a single word, so he had to invent it as he went along, and this he did, loudly comparing the Sultan’s splendour to that of the sun, his strength to that of the tempest and his voice to the sound of the wind. Everyone applauded and cheered. Now quite charmed, the Sultan forgot, why he had called Ali before him, and clapped at the end of the poem in his honour.

‘Well done!’, he cried. ‘You’re a fine poet and deserve a reward. Choose one of these saddles as payment for your ability’. Ali picked up a donkey’s saddle and, thanking the Sultan, he hurried out of the palace with the saddle on his back.

When people saw him rush along, they all asked him:
‘Ali, where are you going with that donkey’s saddle on your back?’
‘I’ve just recited a poem in honour of the Sultan, and he’s given me one of his own robes as reward!’

And winking, Ali pointed to the saddle!

Once upon a time, in a land far, far away, a brother and sister walked together down a long road. The sister's name was Alyonushka, and her brother was called Ivanushka. The two had been walking a long time when they came to a cow's hoof filled with water. "May I drink form it sister?" Little Ivanushka asked. "No, or you will turn into a calf." Alyonushka answered. Little Ivanushka was very thirsty, but obeyed his sister. He obeyed her again when they came to a horse's hoof filled with water. Alyonushka told him that if he drank from it, he would turn into a foal. The brother and sister walked along further, and Ivanushka became increasingly thirsty. Then they came upon a goat's hoof filled with water. "May I drink from it?" Ivanushka asked. Alyonushka once again was firm, "No, if you do you will turn into a kid." But this time the boy disobeyed his sister, and on his first sip turned into a little goat.

Alyonushka sat on the rode crying when a merchant drove by and inquired about her trouble. Alyonushka explained the situation to him, and he said that if she married him they could live happily with the goat. Alyonushka agreed, and so they lived happily this way for some time.

Then one day an evil witch tricked Alyonushka into going down to the river, where she tied a stone around her neck and threw her in. The witch then took on Alyonuska's form and lived as her for awhile. Only poor Ivanushka new the truth about his sister. Little did he know that the witch had plans for him too. When the wicked woman overheard him one day talking to his sister in the lake, she decided to ask the merchant to kill the little goat. It was hard for the merchant to agree to kill Ivanushka, as he loved the goat like a person. But, begin deceived by the witch, he felt his wife's wishes to be the most important. Ivanushka asked the merchant if he could go to the river for one last drink before he died, and the merchant agreed. There at the river's edge the goat cried out to his sister, and she answered him that she couldn't help him with a stone tied around her neck. Neither the brother nor sister realized that this time a peasant had overheard their conversation, and was on his way to stop the merchant form killing Ivanushka.

Upon hearing the peasant's story, the merchant ran to the river, found Alyonushka, and took the stone from around her neck. The witch was then tied to a horse, which was turned loose in an opened field. The little goat was so happy that he turned three summersaults, and was changed back into a boy. They lived happily ever after.

Once upon a time there was a widow who had two daughters. The elder was so much like her, both in looks and character, that whoever saw the daughter saw the mother. They were both so disagreeable and so proud that there was no living with them. The younger, who was the very picture of her father for sweetness of temper and virtue, was withal one of the most beautiful girls ever seen. As people naturally love their own likeness, this mother doted on her elder daughter, and at the same time had a great aversion for the younger. She made her eat in the kitchen and work continually.

Among other things, this unfortunate child had to go twice a day to draw water more than a mile and a half from the house, and bring home a pitcherful of it. One day, as she was at this fountain, there came to her a poor woman, who begged of her to let her drink.

"Oh, yes, with all my heart, Goody," said this pretty little girl. Rinsing the pitcher at once, she took some of the clearest water from the fountain, and gave it to her, holding up the pitcher all the while, that she might drink the easier.

The good woman having drunk, said to her:--

"You are so pretty, so good and courteous, that I cannot help giving you a gift." For this was a fairy, who had taken the form of a poor country-woman, to see how far the civility and good manners of this pretty girl would go. "I will give you for gift," continued the Fairy, "that, at every word you speak, there shall come out of your mouth either a flower or a jewel."

When this pretty girl returned, her mother scolded at her for staying so long at the fountain.

"I beg your pardon, mamma," said the poor girl, "for not making more haste."

And in speaking these words there came out of her mouth two roses, two pearls, and two large diamonds.

"What is it I see there?" said her mother, quite astonished. "I think pearls and diamonds come out of the girl's mouth! How happens this, my child?"

This was the first time she had ever called her "my child."

The girl told her frankly all the matter, not without dropping out great numbers of diamonds.

"Truly," cried the mother, "I must send my own dear child thither. Fanny, look at what comes out of your sister's mouth when she speaks. Would you not be glad, my dear, to have the same gift? You have only to go and draw water out of the fountain, and when a poor woman asks you to let her drink, to give it to her very civilly."

"I should like to see myself going to the fountain to draw water," said this ill-bred minx.

"I insist you shall go," said the mother, "and that instantly."

She went, but grumbled all the way, taking with her the best silver tankard in the house.

She no sooner reached the fountain than she saw coming out of the wood, a magnificently dressed lady, who came up to her, and asked to drink. This was the same fairy who had appeared to her sister, but she had now taken the air and dress of a princess, to see how far this girl's rudeness would go.

"Am I come hither," said the proud, ill-bred girl, "to serve you with water, pray? I suppose this silver tankard was brought purely for your ladyship, was it? However, you may drink out of it, if you have a fancy."

"You are scarcely polite," answered the fairy, without anger. "Well, then, since you are so disobliging, I give you for gift that at every word you speak there shall come out of your mouth a snake or a toad."

So soon as her mother saw her coming, she cried out:--

"Well, mother?" answered the unhappy girl, throwing out of her mouth a viper and a toad.

"Oh, mercy!" cried the mother, "what is it I see? It is her sister who has caused all this, but she shall pay for it," and immediately she ran to beat her. The poor child fled away from her, and went to hide herself in the forest nearby.

The King's son, who was returning from the chase, met her, and seeing her so beautiful, asked her what she did there alone and why she cried.

"Alas! sir, my mother has turned me out of doors."

The King's son, who saw five or six pearls and as many diamonds come out of her mouth, desired her to tell him how that happened. She told him the whole story. The King's son fell in love with her, and, considering that such a gift was worth more than any marriage portion another bride could bring, conducted her to the palace of the King, his father, and there married her.

As for her sister, she made herself so much hated that her own mother turned her out of doors. The miserable girl, after wandering about and finding no one to take her in, went to a corner of the wood, and there died. 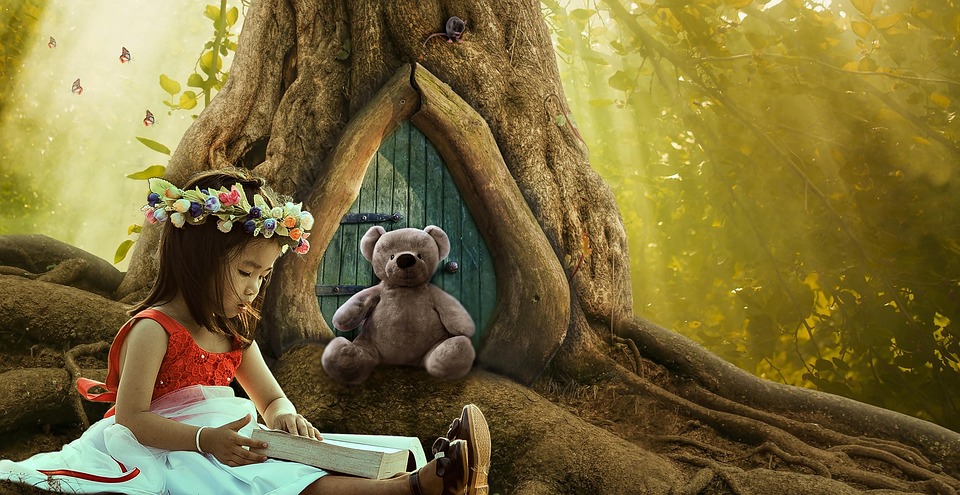